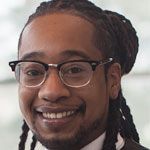 Vester Waters is the Multicultural Recruitment Officer at Interlochen Center for the Arts. A Detroit native, he ventured to the Mississippi Delta for undergraduate studies. In 2014, Waters was recognized by the Tom Joyner Foundation in partnership with Denny’s as a Hungry for Education scholar. Vester also received the 2015 BET Network: Community Leadership Award in Los Angeles, CA. During the 2016-17 academic year, he was selected as an HBCU All-Star through the White House Initiative on Historically Black Colleges and Universities and represented MVSU in Washington, D.C.