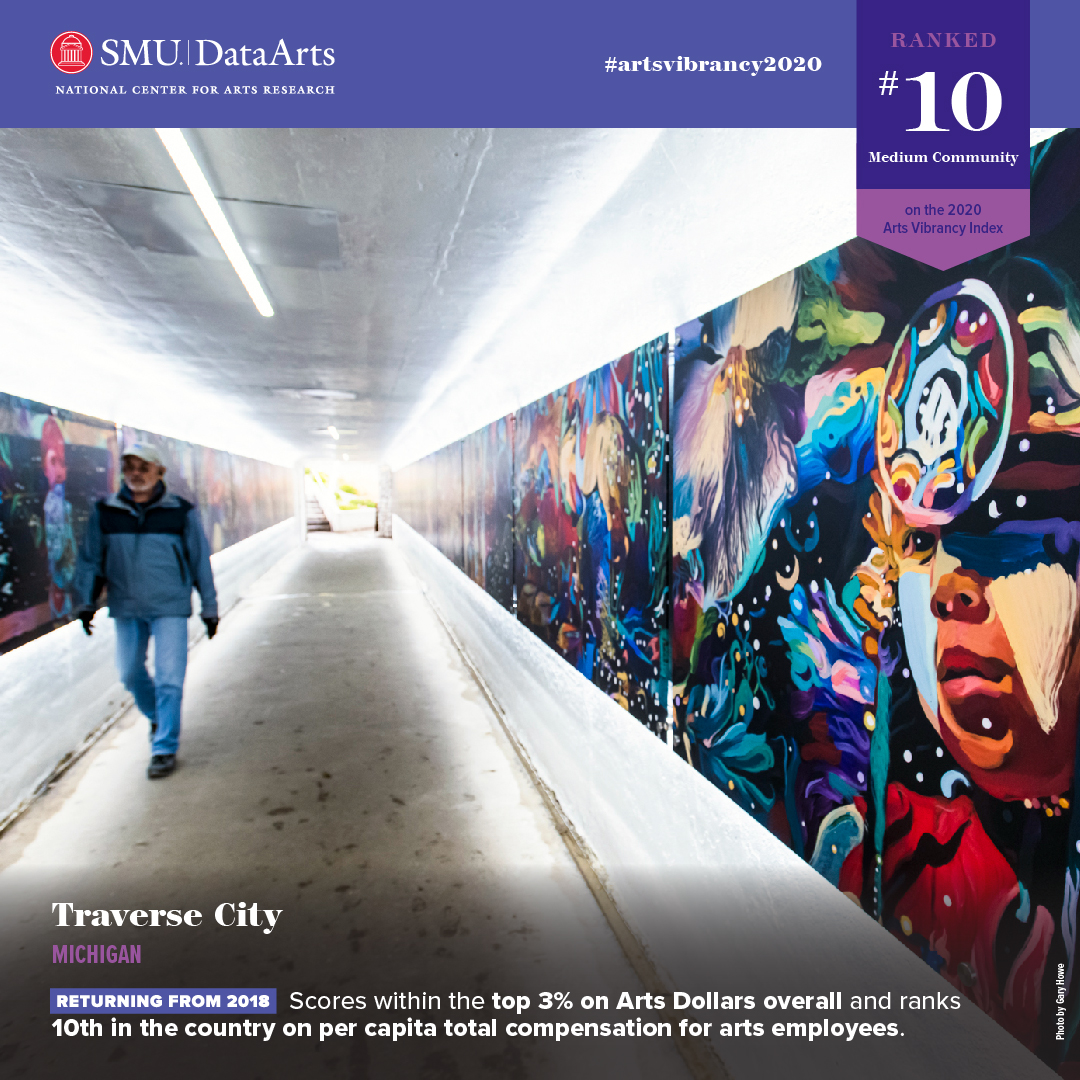 Traverse City Recognized as #10 Most Arts Vibrant Medium-Sized Community in the U.S.

Traverse City was named the #10 Most Arts Vibrant Medium Size Community in the United States when SMU DataArts released its 2020 Arts Vibrancy Index report. The region was previously recognized in 2018 and 2016.

SMU DataArts, a national center for arts research at Southern Methodist University, today released its sixth annual Arts Vibrancy Index, which ranks more than 900 communities across the country, examining the level of supply, demand and government support for the arts in each city. Designed to help arts leaders, businesses, government agencies, funders, and engaged citizens better understand their community’s arts and culture sector, the report highlights the top 20 most arts-vibrant large cities in the U.S., alongside lists for the top 10 medium and top 10 small communities. The report notes Traverse City area as one of the smallest of the middle-size communities:

“RETURNING FROM 2018 – Despite being one of the smaller cities in the medium-size category, Traverse City, MI, possesses a well-developed arts scene. The city is best known culturally for the Interlochen Center for the Arts, which hosts the Interlochen Arts Camp where student actors, artists, musicians, and dancers from around the world flock to spend the summer. Notable alums include Josh Groban and Jewel. Interlochen Center is also home to the Interlochen Arts Festival, as well as some 750 concerts and theatrical productions held throughout the year. Several other theaters and auditoriums dot the landscape throughout the city, boasting a variety of musical and dramatic performances, including specializations in world music, acoustic music, and the blues. Other events include the Downtown Art Walks, the Traverse City Film Festival, and Paint Grand Traverse. The city is home to the City Opera House, built in 1891 and one of only six historically intact Victorian opera houses in the state. In addition to the performance series throughout the year, the House also hosts the National Writers Series. Traverse City is filled with commercial and public galleries, as well as several museums and arts centers such as Crooked Tree Arts Center and The Dennos, which undertook a 15,000-square-foot expansion last year. In 2014 Traverse City established an Arts Commission, where public dollars are allocated annually toward public art programs in the city. In 2019, through a collaboration with the Grand Traverse Band of Ottawa & Chippewa Indians, an exhibition of 19 murals was installed in a pedestrian tunnel to honor the Anishinabee ancestral connections to the region from an Indigenous perspective. Traverse City is ranked 10th on total compensation paid to arts and culture employees and is in the top 3% of communities for three of the four sub-measures that make up Arts Dollars.”

According to SMU DataArts, “…the report is based on 2019 data and therefore does not reflect the impact of the coronavirus pandemic, its findings help illustrate the critical role of the arts, both socially and economically, in cities and towns around the nation. At this historic moment, the report also serves as a pre-pandemic benchmark of where the most arts-vibrant communities are located.”

“The pandemic has delivered striking blows to communities around the country and the nation’s arts landscape has been altered in unprecedented ways,” said Dr. Zannie Voss, director of SMU DataArts. “At a moment of such considerable uncertainty about the future, we hope this report serves as a reminder of the enduring importance of the arts in driving community development, fostering emotional health, cultural literacy, social cohesion, and creative expression. We hope that the report will not only celebrate the many contributions of the arts, but also underscore the value of supporting the sector.”

Full lists and methodology are available on the SMU DataArts website and include scores on each of the three metrics of vibrancy, i.e. level of arts providers (supply), arts dollars (demand), and government support for the arts. In addition to the Arts Vibrancy Index, SMU DataArts provides scores for every U.S. county on its interactive Arts Vibrancy Map on measures of arts dollars, arts providers, government support, socio-economic factors and leisure characteristics.

A full copy of the report is available to read or download at https://culturaldata.org/arts-vibrancy-2020/executive-summary/